Oh gee where do I start with this creeper?
Met him approx early 2014 off a dating site. Same old story, turned on the charm, showered with compliments, intense messages (100s a day). Like everyone else only available for day time dates and it didn’t take me long to tweak something was up. I assumed he was married, and cut contact within a few weeks of the usual pattern of ignored texts and excuses of where he was etc. being what was I thought the start of a relationship which he very much seemed to want I was like everyone else- believing I was the crazy one! He seemed very “up” and high when meeting up with him.  Assumed on something! I work in the medical profession and I recall he would mention narcotics a lot, once asking my thoughts on taking three Endone for a headache!!  He also gave the impression he was father of the year, wealthy and very busy! Mentioned the brothel, very quick to brag about accomplishments but seemed in he’s own world. I simply wasn’t interested and could see through he’s shit. Ultimately I wasn’t able to be a victim as I chose not to be. I hope you lovely ladies bring this creeper down before he does something or passes on stds or something! Would
Not trust him to not do something bad!

Andy answers an ad on gumtree, I’m looking for a roommate. I later discover at the time he at least had his girlfriend of 6 years who he lived with in Bellerive and a girlfriend in Sydney.

His lies include;  his age, being recently single, that he’s a lawyer and brothel owner based in Sydney who works away a lot, he owned a traffic control business in Hobart and later, his residential address.

He was incredibly jealous, if I ever mentioned something as insignificant as I’d changed the sheets he’d question who I’d had over.  He demanded I wouldn’t see other people (I wasn’t).

I got sick of his absences every second weekend, his unavailability on the phone, his apparent long work hours at Downer.

Not convinced of his stories I started to look for answers.

April 2015:
He finally makes a mistake regarding social media and I get his Facebook name (Andy David) he accidentally sends me a friend request and his second life in Sydney is revealed.

He smears this woman with any lie he can think of. He begs me not to tell her. Tears, anger, manipulation, tells me she will commit suicide and it would be my fault, promises to get professional psychological help. He did it all – I contacted her anyway.

December 2015
His father is killed in a car crash and I feel sympathy. After not hearing for a few days I go over to his house to check in and offer my sympathies. A woman is at the house, he is not. I foolishly decide she must be the cleaning lady, I’ve seen her walking his dog before too.

March 2016
He tells me he’s selling the hair salon he had with the Sydney girlfriend (story goes it’s my fault they broke up but stayed in the business for financial reasons). He tells me a story about others being involved in fraudulent financial activities regarding the business and he just wants to get rid of it.

He’s home in Tassie more regularly so I buy the story of the break up and we become friends again. Catching up for mid week lunch or coffee.
He continues to tell elaborate stories about his brothel (which I had already searched the abn – Cuzzas Pty Ltd if you’re interested – and street address etc and concluded it had been closed for some time. Potentially barely getting off the ground). His traffic control business that he wasn’t even a director of was under external administration and in financial ruin.

Everyday I remember a new story or lie he’s previously told.
i was quite lucky compared to many women who have shared their stories, i am a tiny bit sad for the small part that I believe he was genuinely my friend.
However, I can’t ever forgive the terrible things he’s done and continues to do to good women who give and have given him their hearts or for his children.

On first impressions, Andy seemed a really lovely guy, always very friendly, but as time went on, and I spent more time with him, it became clear that he had some troubles.

As it was some time ago, my memory doesn’t have everything in order but below are a few instances that took me aback.

On the evening of the birth of one of his children to Susan, he called me to ‘see if I was free for a visit’ as Susan would be ‘out of action’ for a while.  At the time, I actually thought he was joking, I later realised he was dead serious!

After Susan had the 3 boys, there was a time with the youngest was only a baby, and she had said she was having trouble trying to get her oldest child to school while managing the baby.  I lived near the school and offered to look after the baby while she did the drop off / pick up.  It was nearly all arranged when he called to tell me that it wasn’t needed; Susan would just have to deal with it –trying to distance friends.

He stopped me on the side of the road after leaving their house after a visit one time to tell me that Susan was having trouble coming to terms with dealing with having three children, and it would be better if I just stayed away.  He said that she didn’t really like me anyway, and that it would be better for all of us.  Again, distancing friends.

There was a time when Andy told me they had split up and that it was better if I didn’t contact Susan as she was ‘getting over the shock of it’.  That was when I was just so over it all, and I called Susan and said that he had told me all of that, and was she ok.  They hadn’t split up at all, it was again another lie.

It ended with me becoming distant from Suse, and thankfully over time we’ve reconnected.

So… this is what started it all.  For the Original Link, click here…  We posted it on facebook and low and behold, it all came out…. If you have a story about Andrew David Tchappat, please tell us your Story… 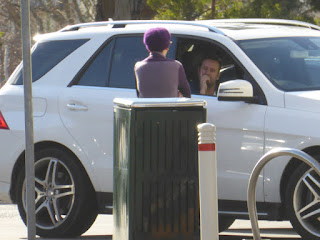 Enter your username or email to reset your password.